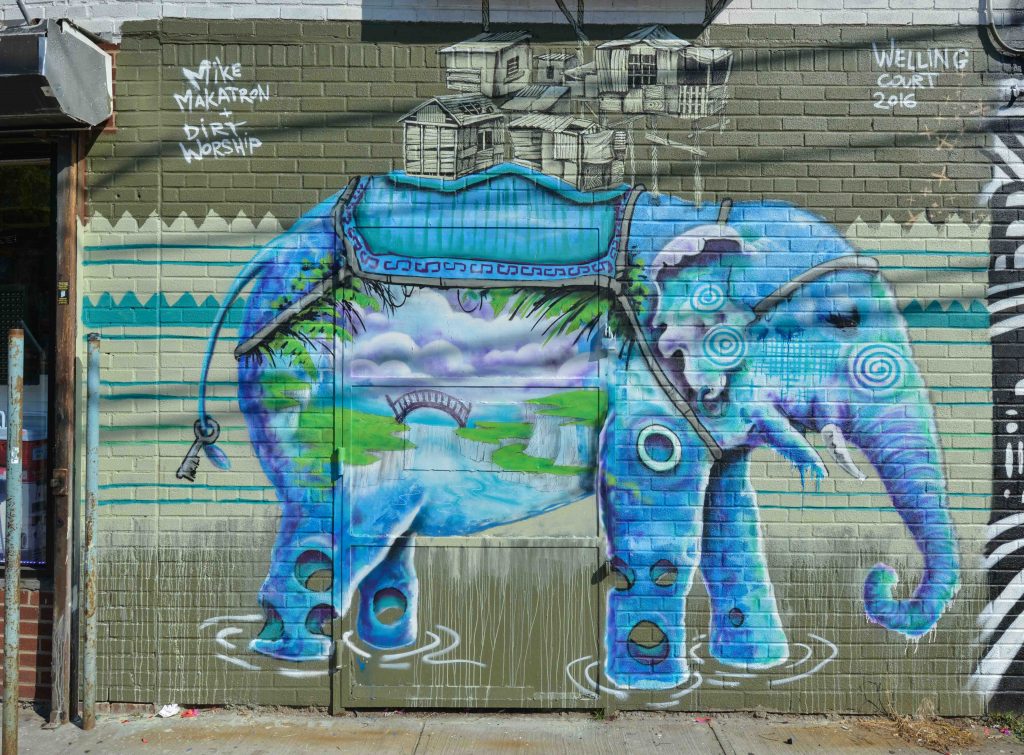 An Elephant Carrying a Village

Artists Mike Makatron and Caroline Caldwell came together to produce a beautiful and surreal mural for the Welling Court Mural Project. Check out their thoughts on the project:

How did you meet each other and what made you start working together?
Caroline: “Mike and I met two summers ago on a roof in BedStuy, where he was doing a roll down. We kept in touch across seas when I was preparing for a mural in Atlanta for Living Walls. Mike was giving me advice about spray paint and mural tips since I hadn’t painted much before. He told me he was coming back to town and we wound up painting together.”

What did you bring to the collab and what did Mike bring that made it work well?
Caroline: “Mike designed the mural: a beautiful elephant carrying a village. I’ve drawn a lot of houses and shanties so Mike suggested I do the village, and he and his friend tackle the bulk of the piece. It was a pretty perfect collab since neither of us had to compromise our styles to make the image coherent. Like most people walking by thought the image was by one artist, which was pretty cool.”

How do you feel your own work was affected when you collab with Mike?
Caroline: “This piece with Mike is actually the first time I’ve ever collaborated with another artist! It was inspiring. Mike taught me about some great tools I hadn’t heard about. He’s smart and experienced.”

What is this particular mural about?
Mike: “To me, the elephant with a village on top represents the earth as an ancient and natural thing, with us humans living in cities on top, traveling thru time. The village concept is something I’ve noticed in Caroline’s work, so it was perfect for the collab on this mural. I love collaborating on my murals!”