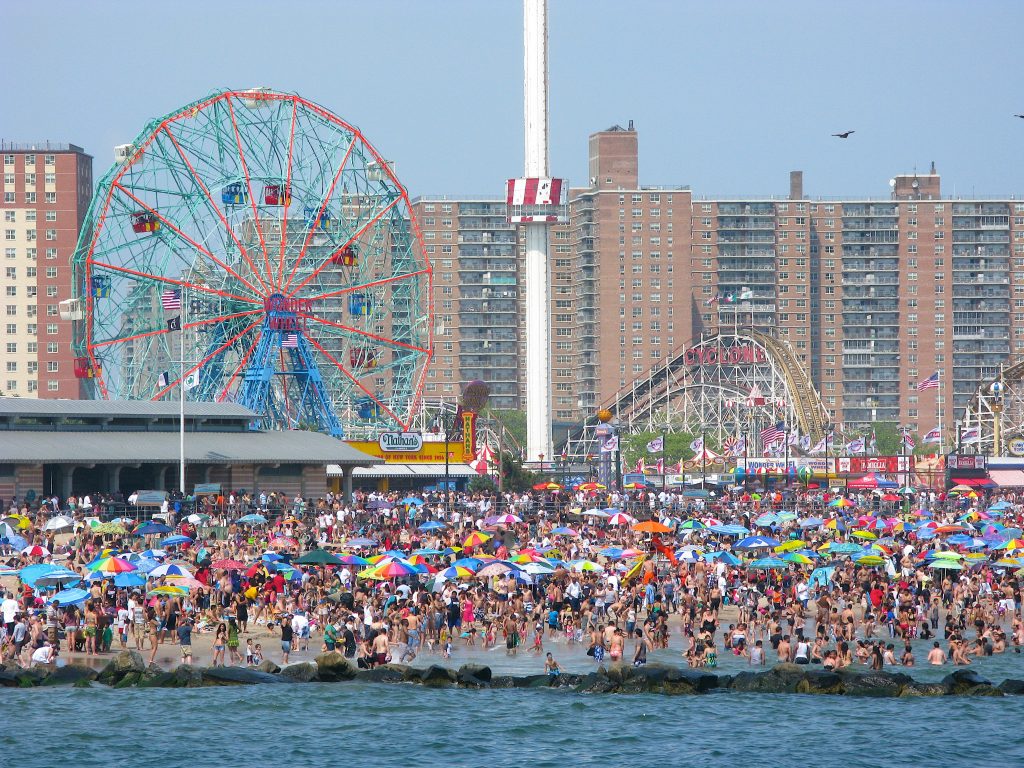 Gentrification in Coney Island as an excuse to undermine street art: Part 1

I recently read an article about the use of street art as a tool for gentrification in Coney Island. As all of us interested in street art know, this is not new. In fact, though it is very important, I do not want to discuss it here. Continuing to read the article, I reached a “critique” of the street art that was recently painted as part of the project in Coney Island. In summary, the author of the piece wrote: “Not only are the murals in “Coney Art Walls” homogenous, they prove virtually interchangeable”. Knowing the project, and some of the artists involved, this statement seemed downright ludicrous. Was the author perhaps riding the rollercoasters while checking out the art? Or maybe he was too busy swallowing hot dogs at Nathan’s annual hot dog contest? Probably not, as I later noticed that the photos in the article are credited to the author of the piece. Seriously now, how can a piece by How and Nosm, for example, be interchangeable with Aiko, Lady Pink, Swoon or Daze?! (Check out some of the art HERE) It’s completely justified to comment on the evils of gentrification and the motivations of artists that are involved indirectly in this process. It’s utterly weak to wed the art of some of the best street artists alive and the diverse themes of their work to this phenomenon.  This complete dismissal of street art and artists by an art critic sounded eerily familiar… Who wrote this article???

I patiently read the entire article and upon seeing the writer’s name at the very bottom, everything became crystal clear! Christian Viveros-Fauné- that name seemed so familiar, and not in a good way. And then I remembered, I met said author/critic/curator several months beforehand as part of an event. Last autumn I was invited by students in the Art Market Program at FIT School of Graduate Studies to speak alongside Viveros-Fauné and others as part of a panel on “the evolution of the art market”. I was very flattered to be invited and was told by the student selection committee that I was chosen as a representative of a “do-it-yourself” artist/photographer who managed to bring to life a project from the ground up outside of the conventional art establishment. This included the compiling of my book Outdoor Gallery, its launch event, which included an art show I produced and curated, and both their promotion before and since. Unfamiliar with my fellow panelists, I vowed prior to the event that among people who must be seasoned experts within the art world, I would make sure not to utter a single word about anything that I was not 100% confident about. Thus, later during the debate when the conversation shifted toward dynamics in a gallery setting, or what an artist needs to do to find representation, I kept my mouth shut, though I was attentively listening, to my complete horror! 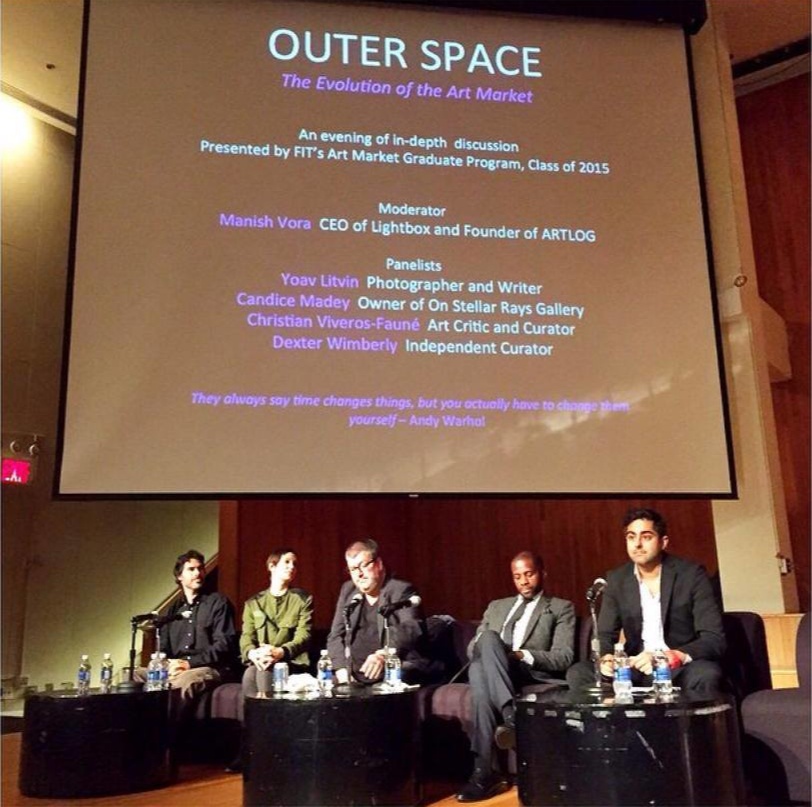 FIT Panel. That’s me on the left with Christian Viveros-Fauné in the middle.

When asked to introduce myself I simply stated that I am a documenter of an incredible art movement. People call it “writing”, “graffiti”, “street art” and a variety of other names. I continued by stating how much I admired graffiti and street art as inherently progressive and creative genres that can dwell outside of the mainstream art establishment and it’s politics- namely its structure of curators, critics etc. As such, the content of graffiti and street art feels more real to me and tackles many issues that are absent from conventional art discourse. This is due to many reasons, but first and foremost because of its status within society; it is free for all on the street and much of it is illegal. Furthermore, I love that the streets are a democratic context for art and as such serve as a setting shared by artists of all levels- from the kid who tries to tag for the first time, to masters of the genre. I continued on and on about my views of graffiti, its surrounding politics, its amazing diversity in technique, motivations and my personal story of how it has become my passion. Viveros-Fauné spoke immediately after me, and challenged my take on street art as a serious art movement. I was taken aback by his curt response, which seemed bizarre and out of place. To my disappointment, some of the other panelists also did not get it. They just couldn’t comprehend the beauty or the grit of art on the streets. They saw the street as simply an inferior setting for art, at best as a trendy jumping off point for artists who dream of being in a gallery or museum. At this point of the debate a street artist who was sitting in the audience angrily protested, to no avail.

This kind of unabashed arrogance continued throughout the debate and I found myself quite a few times cringing in my seat, wishing I were taping this, fantasizing how I would become a YouTube sensation as a result (though to my disappointment it was not taped). The most shocking exchange took place at the end of the debate, when a young artist from the audience courageously yet timidly asked how he should go about approaching a gallery with his work. Several of the panelists shamelessly ridiculed him, with Viveros-Fauné at the helm. They told him that he should never under any circumstances talk directly to, or disturb a gallery owner or curator. They said he should befriend someone who knows the gallery owner and (in other words) weasel his way into the gallery. They went on to say that the only way to succeed in the art world was, in short, to engage in a murky cocktail of art world politics that included lying, manipulating, and schmoozing those that conveniently reside at the top and whose role is to pick and choose artists they deem are worthy of success. All this was said with an unmistakable self-satisfied smirk. The young artist who asked the question sat down, disheartened. I was shocked.  I responded by saying that I cannot disagree more with the apparent consensus shared by my fellow panel members and that I know quite a few galleries that do not work in such a manner. Furthermore, speaking to the young artist, I said I knew many artists who by virtue of their work and honesty reached the top. We continued disagreeing on pretty much everything and the panel ended with an awkward, uneasy vibe. After the conclusion of the panel quite a few students and attendees came over and thanked me for my words. Viveros-Fauné walked off without shaking my hand.

The whole exchange brought to mind another exchange I had only a few weeks prior to the panel. I wrote an email with a question to one of the people I admire most- Noam Chomsky– the esteemed Professor of Linguistics at MIT, considered to be the leading intellectual alive today. Honestly, I didn’t expect a reply, as I’m sure Chomsky receives countless emails daily, but figured what the hell. To my delight, Chomsky kindly and respectfully responded to my question within hours. I can’t help but think: good thing Chomsky isn’t in the art world or one of Viveros-Fauné’s gallery owner or curator friends, otherwise I wouldn’t have gotten a response, or worse- even ridiculed.

Image of Coney Island from Wikipedia