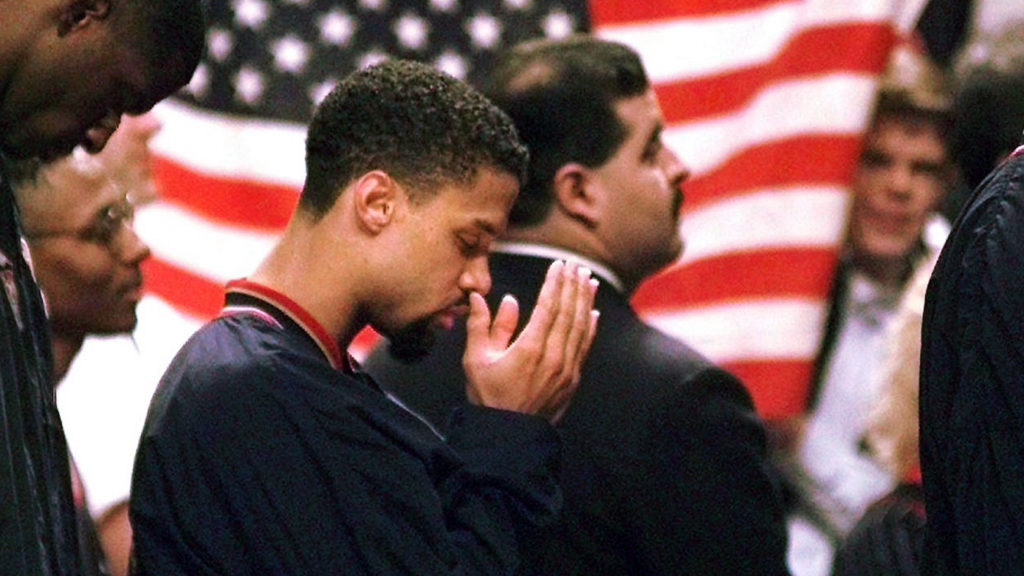 “You know the thing I like about Mahmoud is that he’s always real,” says Shareef Nasir about Mahmoud Abdul-Rauf, formerly known as Chris Jackson. In the documentary By the Dawn’s Early Light: Chris Jackson’s Journey to Islam directed by Zareena Grewal in 2004, Nasir continues: “We’re walking down the street and he’ll say “Hey man you see that guy over there?” Some guy’s homeless just sitting down. He’ll say: “Do me a favor… Go in the restaurant and get him a hamburger. Just give it to him and let’s walk away.” That’s Mahmoud. Not the flag, not the jump shots, not the crossover dribble, not the Tourette’s. That’s Mahmoud.”

In his aptly titled autobiography In the Blink of an Eye (Kaepernick Publishing, 2022, with Nick Chiles) Mahmoud Abdul-Rauf — star athlete and person with disability, father and son, mentor and student, political activist, Muslim, Black man, brother and lover — lays out his remarkable journey from Gulfport Mississippi to the packed stadiums of the NBA and beyond.

Intuitive, humble and never spiteful, Abdul-Rauf forges a document which commands respect and dismisses pity — even when exposing the devastating events which crushed his dreams. In the Blink of an Eye is a powerful, honest account of the life of a basketball superstar whose career was destroyed by the white supremacist, capitalist forces underpinning American empire, its armies and star athlete celebrity culture alike. Yet within, Abdul-Rauf has always pursued what felt just and right.

Ignoring chronology prior to diving into his childhood days, Abdul-Rauf opens his account with a dry, resolute portrayal of the infamous affair which led to the end of his basketball dreams; his choice to refuse to stand up for the American flag and the dire consequences he faced, driven by the capitalist, racist, ableist mindset of the NBA. As such, Abdul-Rauf stands proud with brave activists who unapologetically have challenged the settler colonial status quo within the American empire. Most recently, he confided to his publisher, Colin Kaepernick.

“During those early mornings, I was not only competing against my imagination; I was doing battle with Tourette… I was a slave to the syndrome.” (p45)

Suffering from uncontrollable tics, twitches, lapses in consciousness and obsessive-compulsive thoughts and behaviors from an early age, Abdul-Rauf was misdiagnosed with “habits that come and go” at age 9, condemning him to confusion and loneliness until the age of seventeen, when his Tourette syndrome was finally recognized by a physician, and he realized he was not suffering alone with his affliction.

People with Tourette syndrome often report a buildup in tension when suppressing their tics to the point where they feel the tic must be expressed (against their will). Indeed, from his first waking moment, Abdul-Rauf felt a desperate lack of basic control over his body while simultaneously experiencing a torturous self-deprecation and drive to perfectionism, as well as consistent ridicule by his peers.

“And then there was basketball. My connection to that big round ball was immediate. Intense. I fell in love right away.” (p40)

“As early as fourth grade, I decided it was basketball or death.” (p41)

Exacerbated by anxiety, the explosive symptoms of Tourette syndrome can be mitigated by reducing stress and engaging in meditative practices like the arts and sports. And so, Abdul-Rauf naturally gravitated to basketball for relief, distraction and empowerment. In fact, he used it to construct a firm sense of his own identity, the ultimate defense against the unfair world around him.

“On my birth certificate, on the line where it says “Father,” mine was blank. More than a half century later, the line is still blank.” (p25)

Raised by his devoted single mother, that big round ball became the inspirational father figure Abdul-Rauf never had, as he adopted a strict, grueling, lonely and sometimes dangerous workout regimen, practicing in the dark of dawn, during torrential downpours and lightning storms, manifesting his dream of NBA stardom with the fervor of his hero Malcolm X – by any means necessary. And it is this perpetual drive toward freedom, whether from the internal shackles of Tourette syndrome, or those imposed by American society, which guides Abdul-Rauf’s journey throughout In the Blink of an Eye.

“Listen, I don’t care what you or anybody else thinks. I’ve made a decision that I’m going to live and die with a free conscience and a free soul, whether you or anybody likes it or not.” (p223).

Abdul-Rauf viewed basketball as a means to escape the hardships of poverty, yet he never looked for a handout. As coaches from the richest, most respected Universities in the country made a pilgrimage to his mother’s house in Gulfport, Mississippi, with lofty promises of immense rewards if only he’d join their teams, it just didn’t feel right. All Mahmoud wanted was fairness. To get what he rightfully deserved. Finally, a coach from Louisiana State University, a relatively small-time school, was real with him, promising fairness and nothing more. Abdul-Rauf accepted his offer.

In spite of the toxic nature of American sports, which regards players as money-making vehicles to be discarded when their health deteriorates, Abdul-Rauf sets a fatherly example, approaching the game responsibly. In a surprising anecdote, he clarifies that although dunking the basketball is a sensationalist crowd pleaser, and he certainly was capable of it (he participated in the 1993 Slam Dunk Competition), he avoided it during games to safeguard his health.

Throughout his memoir, Abdul-Rauf weaves both the rewards and sacrifices needed to become a professional basketball player. In so doing, he speaks for all those who have devoted themselves to a vocation or life mission, whether it be sports, the arts, activism, or parenthood. Undoubtedly, this book will appeal to basketball aficionados and people interested in society and politics alike.

At peace and devoid of anger, Abdul-Rauf consistently sets a powerful personal example, outlining his spiritual transformation with humble pride at his achievements and a forgiving embrace of his mistakes.

It is this commitment to personal accountability which makes In the Blink of an Eye so important and timely. In a world riddled with shameless corruption endemic in patriarchy, imperialism and corporate capitalism, Abdul-Rauf faces his own guilt and shame unafraid. His ability to inspire by focusing on mistakes as guides for positive change is rooted in his humility and keen sense of self as a human with Islamic faith, and the power that comes from overcoming the challenges of Tourette syndrome. Abdul-Rauf places his immense accomplishments alongside his shortcomings, setting an example for every person to use fear, shame and guilt as opportunities for growth. It is this power, conveyed throughout In the Blink of an Eye, which enables him to provide a real diagnosis of American society and admirably contend with its wrath.

“Look, the flag is a symbol of tyranny and oppression. Am I saying everything in America is bad? No. There’s good that exists. But as a Muslim, wherever bad is, even if it’s in Saudi Arabia, we don’t stand for it. We can’t be for God and oppression at the same time. There’s a verse in the Quran which says Allah didn’t create the human being with two hearts. He only gave us one. So, you can’t worship Satan and God at the same time. You know, it’s a contradiction. You got to make a choice. You can’t be neutral.” (p10)