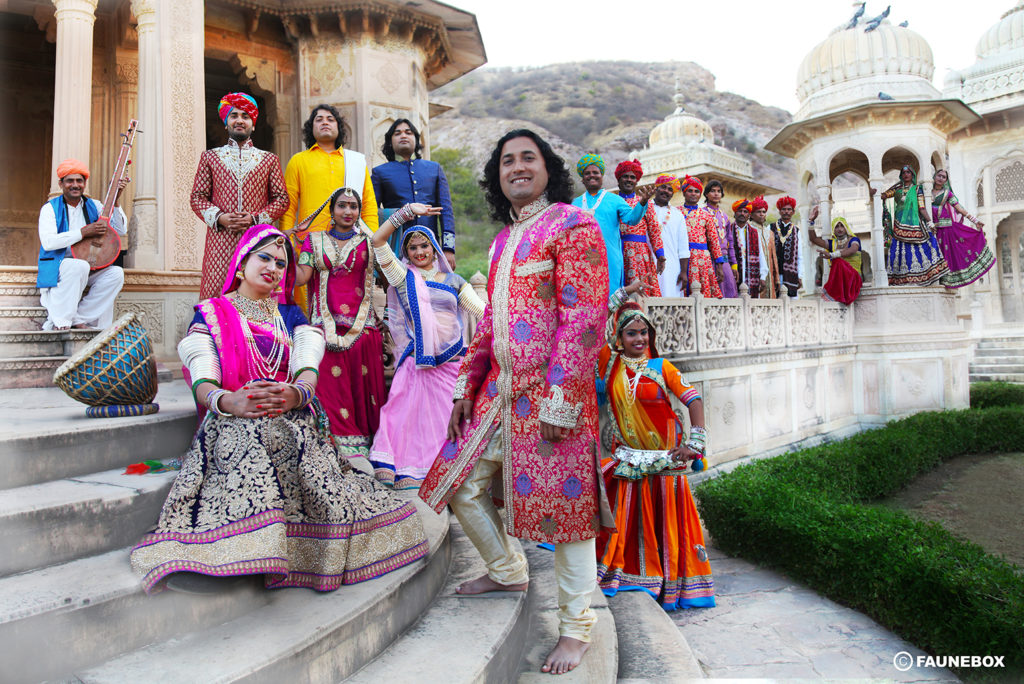 The Romani (Roma) people, colloquially known as Gypsies, are the quintessential example of a nomadic ethnic group that has settled in a multitude of locations, yet maintain a relatively cohesive collective identity. Romani culture can provide a window into the importance, hardships and rewards of embracing and contributing to a collective humanity, while preserving and celebrating cultural distinctiveness.

Performing a collection of classical and folk song, music and dance, the Dhoad Gypsies of Rajasthan celebrate a culture that many believe is the ancestral origin of the Romani (see also here). This ancient musical and oral heritage serves to entertain, on the one hand, and preserve and propagate history and its lessons, on the other.

Centered around four brothers who honor the teachings of their ancestors, The Dhoad Gypsies of Rajasthan have performed in over 100 countries and collaborated with countless musicians around the globe. Their brand new production and upcoming tour of the United States invites a North American audience into the mysterious life of desert-travelling artists of Rajasthani tribes with its vibrant stage, captivating rhythms and melodies and its profoundly compassionate message of a shared humanity that has been gleaned from centuries of trials and festivities.

In this interview, Rahis Bharti – the band’s director and Tabla player- is joined by his brother Amrat Hussain – the group’s lead percussionist and Tabla player – to discuss the importance of music and culture as a means of preserving the lessons of history, forming bonds between and within communities and celebrating a culture of sharing and hospitality. In our times of war, political turmoil, climate change, job insecurity and growing xenophobia, these lessons are vital, particularly in the United States.

Describe your background and heritage. What is the history of musicians in Rajasthan?

Rahis Bharti: Romani people, aka as “Gypsies”, are travelers, entertainers, storytellers and teachers who experts believe originated from my birthplace in Rajasthan, India.

My brothers and I come from a lineage of musicians dating back over seven generations. Our family originated from the small village of Dhod in the state of Rajasthan, India and served the Maharajas (Kings and Queens) in their courts and beyond.

Centuries ago, when India was a collection of kingdoms, musicians had several very important roles that transcended mere entertainment; they chronicled, defended and propagated the histories of families, communities and monarchs. As emissaries and representatives of their ancestors, they conveyed human knowledge – both joys and tragedies – through song and dance. Finally, musicians would commemorate traditions and develop bonds between peoples.

We continue this tradition today, albeit on a much larger scale.

When the Dhoad Gypsies of Rajasthan visited France, Romania, Macedonia, Hungary and Spain, we were pleasantly surprised to meet Romani people who had similar traditions, musical rhythms and even elements of language that were very similar to our own. Gypsies are inspired by different cultures and incorporate different wisdoms into music, storytelling and dance to spread joy, knowledge and history.

How do you bring people together?

Amrat Hussain: Art and music are like perfumes that do not distinguish between different kinds of people. Every human is attracted to wonderful odors and needs them for spiritual health.

As Rajasthanis, we are very familiar with political conflicts and the issue of migration. Leaving a home is extremely difficult, both emotionally and physically, yet it is often necessary for survival. Therefore, the most beautiful, empathic and humane act is to show migrants hospitality, compassion and warmth. This is the message we convey at Dhoad Gypsies of Rajasthan: opening a door, a heart, a city or country is the most precious gift to our fellow woman and man.

Largely due to the Rajasthani/Romani nomadic lifestyle and the knowledge it affords, we have long shed prejudices related to skin color, religion and so forth and instead embrace the vast differences between people as a catalyst for curiosity and growth and our commonalities as a source for empathy and camaraderie.

When you perform in India, your audience can understand the lyrics of your songs and is familiar with the tunes. What can you provide those who cannot?

RB and AH: The positive vibrations and melodies are the same for all people around the world. When you convey happiness, joy and love people’s hearts are touched and opened to others. This is a profound lesson that can be garnered after centuries of travel, which have been unfortunately peppered with some discrimination and persecution: the vast majority of humans, regardless of skin color, gender, religion or nationality seek love, camaraderie and mutual growth.

In our modern era in which the world is connected like never before, our band provides a window into these lessons for thousands and even millions of people who could not access them in the past. What’s more, our success has inspired artists and musicians in Rajasthan to invest in our native culture and heritage.

What is your message to American people?

RB and AH: America is the global empire and therefore responsible for the well-being of much of humanity. Instead of focusing on divisions and attempting to segregate, we at Dhoad Gypsies of Rajasthan celebrate our differences as a means of learning from one another, collaborating and growing. Our eclectic group of talented musicians, singers, dancers and performers convey this message of flexibility, adoption and expansion.

We come from a family of Muslims who were forcefully converted from Hinduism to Islam during Moghul control of the Indian subcontinent. As a result, our family learned the beautiful Sufi tradition and incorporated it into our musical practice; we sing Hindu spiritual songs as well as Muslim ones in temples and mosques, respectively.

The band is an integrated collection of both Muslims and Hindus who come from all corners of Rajasthan and work cooperatively. We respect each other’s cultures and traditions and celebrate them together. Our strength comes from preserving our heritage as well as introducing innovations as a result of fusions with the musical styles we encounter during our travels. We believe that one of the most important goals of any individual is to contribute to a collective, whether a family, a community, a city, country or all of humanity.

From our experience, our message is contagious. Initially, people tend to refuse foods they are not familiar with but once they get a taste – they are sold! We have faith that anyone exposed to our displays of love, joy, and the celebration will be delighted and even transformed. These lessons are crucial to fostering a culture of acceptance, cooperation and hospitality.

We’ve had a difficult time coming to the United States. The US government initially did not grant us visas because they believed we were not famous enough (that was what we were told), even though we have already played over 1200 concerts globally and in front of dignitaries such as Queen Elizabeth, President Macron of France and the Prime Minister of India. We are not coming to invade you, we told the American officials, and do not need your dollars or want to live in your country. Finally we were granted entry visas, though we have had to cancel several performances on the east coast due to the delay.

Rahis Bharti (bottom right) and The Dhoad Gypsies of Rajasthan in Jaipur, India

How do you perceive the struggle of the indigenous people of this land – the native Americans?

RB and AH: The gravest danger for a collective is to lose its unique cultural identity. The only way to protect that heritage is by celebrating and sharing it with the world as well as teaching the oral and written ancestral histories and traditions to new generations.

We are aware this is easier said than done, especially when a collective is under attack, but from our experience, a steadfast belief in these goals is the only chance it will prevail. As travelers, we always find enough people who sustain our nomadic lifestyle. We reciprocate by providing our energy, skills, talents, and historical knowledge.

See the Dhoad Gypsies of Rajasthan schedule of performances across the United States here.

[…] This article was originally posted on the author’s blog at YoavLitvin.com. […]

[…] This article was originally posted on the author’s blog at YoavLitvin.com. […]