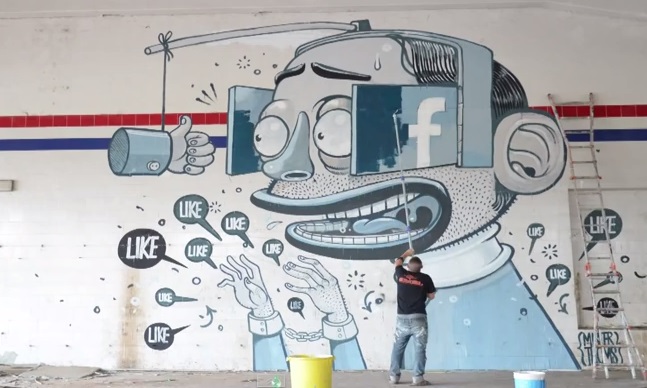 I run a couple of Facebook “Pages”. Every time I post something to a page, I see a button at the bottom of the post that reads: “Boost your Post”. For a minimal investment of $10 (though the sky is the limit), Facebook promises you the efficiency and glory of your own PR firm- they will promote your post, i.e. “Boost” it, to thousands of people who would otherwise not see it, the number of which depends on the sum you spend, of course. One can define a target demographic, age etc. It’s all pretty creepy.

I was always curious, but never tempted to “Boost” anything out of unwillingness to part with $10 for freaking Facebook likes. If someone is interested they will reach it, I reasoned. Last night I decided to test what Facebook’s “Boost” is really worth. I paid $10 to boost a post on my Outdoor Gallery Facebook Page of an article I wrote last week. In this article, I discuss the challenges artists face when working with large entities and the morality of their decisions, i.e. deconstructing the term “selling out”, and devised a very simple approach to tackle this question. The article is largely philosophical and not necessarily a light read. Because my article, like this one, is a blog post on my personal website, I can use “Google Analytics” to see the number of people visiting the article’s webpage. And so I decided to run my little experiment with the goal that my article reaches many readers. I would be able to gage this using two indications:

1) I’d see a spike in the number of visitors to the article’s webpage on my site using Google Analytics.

Rats will press a lever for reward: food or cocaine for example. This experimental technique termed Operant Conditioning was widely utilized by B.F. Skinner in his studies using pigeons, and it is still used to study reward pathways in the brain, especially in studies of drug addiction. Simply stated, Operant Conditioning is a learning process whereby a behavior is dictated by its consequences: if a rat presses a lever and immediately afterwards receives some cocaine, or a food pellet, the lever-pressing behavior is reinforced and the rat will do it more often. These neural systems have evolved to ensure survival by promoting behaviors associated with reward and are preserved in humans. Today we know much of the neural circuitry involved in reward pathways, the key role of many neurotransmitters in these processes (Dopamine being the most widely researched), and how these pathways can operate to reinforce behavior.

And now to the results of my experiment. I woke up this morning to a whopping 315 Likes on my “boosted” Facebook post. However, when I checked actual traffic to the article’s page on Google Analytics it had not spiked at all- in fact, the change from yesterday to today was not different than on any other day. Also- there were no new comments on any thread, showing absolutely no engagement (indicator 2 above)- which was the goal of my “boost”.

Facebook did a good job learning the techniques of Operant Conditioning used to manipulate rats’ behavior. As social animals, we humans seek attention and social acceptance and find it rewarding. Facebook understands that well, and that is the secret to their “Boost” money ploy. They recognize that the behavior of “Liking” leads to reward and therefore it is reinforced. Meaning- “Liking” is akin to a rat’s lever pressing, and our feeling of social acceptance is the rewarding rush of cocaine, or a tasty meal.

Conclusion- To people who seek more than a rat’s reward i.e. immediate gratification, “Boosting” is a complete waste of money.